In the first half of 2020, the Parentii team hopes to support deliberative issue naming, parent trainings using the infomat and Parent-to-Parent training as part of two conferences:

The team looks forward to further exploring the use of the infomat and adjusting the tool based on feedback and experience.

During 2018 and into 2019, the Parentii team are working together with community groups to develop an infomat tool for use in naming a framing conversations specific to community groups.

In the previous year we identified that the infomat tool we were using for conversations seemed to be calling for the framing to be very specific to local community.  We questioned how to maximize the use of work already done (e.g. the categories generated by the Parentii team in the issue guide) and utilize that as the valuable while engaging with the challenges specific to the host group/community.

What developed was an infomat tool that was customizable to community specific problems by small leadership groups or others familiar with the identified issue prior to holding a larger conversation.  We took this newly formatted infomat into communities with hopes of facilitating conversations about community specific issues by personalizing the experience to each community.

After meeting in one on one and small group settings multiple community groups were interested in the new infomat and the ability to customize it, but for various reasons felt their group was not quite ready to hold community-wide conversations on their chosen issue.  Topics included: parent teacher organization concerns, race and religious issues, and problems surrounding the opioid epidemic.

In New Haven, a father’s advocacy group met with Parentii team member(s) in hopes of personalizing the infomat for a father’s only forum.  A group of 4 fathers attended as a leadership group and worked to customize the infomat with a Parentii team member as moderator.  The resulting conversation coalesced around the challenges and barriers that father’s face when trying to be parents to their children.  There was much discussion about the Connecticut systems, including rules and regulations, that the father’s believe unfairly favor mothers over fathers. The father’s compared experiences in other states and pointed to how other states have reformed their systems to better include fathers and support fathers in getting back on their feet even after they have made mistakes.

At the end of this session it was determined that is was not best to have female facilitator for a Father’s group that was addressing many issues of parenting with Mother’s and systemic triggers against male father’s.  We supported some capacity building with the leadership using the Parentii placemat, but our group did not structure or hold a forum.  In addition, the father’s arena in New Haven is a quickly shifting landscape with new groups starting and groups of groups coming together. Given this, and an organizing effort by the New Haven Community Foundation, we determined that it is better to focus the Parentii resources on training across the father’s groups. The organizers are very excited about this approach.

The Parentii work continued in 2017 with careful reflection upon feedback given during issue guide conversations over the previous years.  A commitment to a community responsive format was pivotal to the Parentii team.

From our previous issue guide conversations, we learned that engaging citizens in meaningful and continuous ways can be difficult.  Collaboration that engages citizens in co-construction and offers opportunities for clarification and meaningful participation is more successful and tends to increase buy-in (particularly if the problem directly effects the citizens engaged).  The perception of power distribution and authenticity of contribution can make or break successful engagement. It is important to note that definitions of successful interaction may vary from partner to partner in collaborations.

From our previous issue guide conversations, we learned that engaging citizens in meaningful and continuous ways can be difficult.  Collaboration that engages citizens in co-construction and offers opportunities for clarification and meaningful participation is more successful and tends to increase buy-in (particularly if the problem directly effects the citizens engaged).  The perception of power distribution and authenticity of contribution can make or break successful engagement. It is important to note that definitions of successful interaction may vary from partner to partner in collaborations.

Given these reflections, we sought to engage community members in reworking the issue guide so it could be a more organic process. We considered use of an infomat to serve as a tool to start a conversation, while being organic enough to jump participates to develop their own issues. In this way, the conversation is spent on issues affecting group and not the predefined format of issues previously used with the issue guide.  Moving forward, the team agreed to dedicated time to development of this infomat tool.

Our parent leadership work thus far has been a four-year, multiple phase project.  In the Fall of 2015 and Spring of 2016, we disseminated the project in a series of presentations that addressed the latest phase of our work, knowledge transfer.

Parentii team members presented how they have continued to be active as collaborators engaged in shaping desired outcomes and project practices. Parent leaders shared how they have co-constructed materials documenting capacities and skills built throughout the previous phases, and how these capacities/skills were readily transferred to additional parents, and in new scenarios.

These presentations brought together parent leaders and their University research counterparts to share their experience in community engaged, participatory research. Additionally, the Parentii team facilitated break-out sessions in which participants could hold conversations about parent leadership, community engagement, and the intersection with University-based research.

Dissemination occurred at the following venues:

The Parentii team spent time in 2015 defining the learning community and what we hoped to accomplish moving forward.  With the initial issue guide roll out completed, we worked to identify specific areas in which we could continue the work of community specific deliberation and community related action projects.

From our previous work together, members of the Parentii team began to identify what their individual contributions to the process were.  We had individuals with distinct roles and talents that were not necessarily clearly defined.  For instance, one Parentii member was skilled in visually capturing the work through photographs and videos.  We considered her to be our visual historian, documenting the process with images.  Other team members similarly found their niches and began to consider how these contributions could continue in our future endeavors.

We documented our previous work in a resume format.  This Parentii Resume clearly identifies presentations, grants, and other forms of dissemination the Parentii team has completed over previous years.  We further developed a postcard style information sheet which clearly states the goals of the Parent Inquiry Initiative and how they are to be achieved.  These materials serve to define the learning community and give a clear path forward for the Parentii team.

During Fall 2013 and into 2014, Parent Co-Researcher and Leaders are working together in a learning community to identify what parents need to take a leadership role in community-based conversations.  Specifically, parents are determining which experiences and what information best supports parents in bringing a Looking for Answers Together Issue Guide Conversation to their own communities.

For a better understanding of this work and a glimpse of what parents have already accomplished, view the Looking for Answers Together Within Our Community video here.

This is the second in a video series documenting the initial Parent Information Action Research project and resulting extended inquiry.  This video documents the community based action research projects enacted by parents to address specific community need(s).

Looking for Answers Together Issue Guide 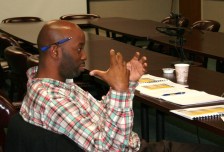 In the fall of 2013, a facilitation training for the Looking for Answers Together Issues Guide took place in Bridgeport, CT.  Photographer Karla Woodworth reflects “For some reason this photo of one of the women training with us in Bridgeport came to mind.  I believe it shows the amount of passion in the people that we have worked with the past few years. It illustrates the process of getting ‘it’ and feeling ‘it’.  Looking through all the photos from this training session, there are similarities found in the hand gestures.  The gestures capture what a loving and passionate group this was.  This is just a few of many moments of joy that I have encountered with this work and remains ingrained in me.”

Photographer Karla Woodworth reflects, “I love this image of Yuri Maciel-Andrews (one of the original parent co-researchers). She shows such power in this photo. She stands in front of the many diapers collected by The Diaper Bank in New Haven, CT. They would be distributed to organizations which assist families in need. I think she represents what we all would like to feel while doing work on behalf of others: informed and empowered.”

Photographer Karla Woodworth captured these images in June of 2013 and March of 2014.  Karla reflects, “I was thrilled to witness and photograph Bridgeport’s Community Messengers meeting in June of 2013. I really appreciated how a group got together and shared what was going on in different neighborhoods of the city. That day there was great information shared about farmers markets and CERT training.”
Karla continued, “After this experience, I thought that Torrington could really benefit from a program like this.  I brought the idea to the Torrington Early Childhood Collaborative and we were able to run a version of it around 6 months later. In March of 2014, Torrington Community Messengers held a graduation ceremony. I would love to see a version of this continue in Torrington. There is nothing like being both  educated and informed.”

A Looking for Answers Together issue guide conversation was held at Hartford Public Library in the Summer of 2013.  This conversation was distinct as it was conducted entirely in Spanish.  Photographer Karla Woodworth reflected on this experience stating “Although the conversation was all in Spanish, I remember thinking that I could pretty much follow along with the conversation and it sounded similar to issues I had heard in Issue Guide Conversations held in English.  It was also the first time I met Marilyn Calderon and I really appreciated how she interacted with people.  She made a connection with each person during the process.  I could see she made them feel comfortable and heard.  I learned so much at this event even though there was a language barrier.”

This is a public blog documenting the work of parent co-researchers and interdisciplinary university researchers learning together what supports parent leaders.

Urban Living in the Age of Climate Change: A Sustainable Local Development in Hartford and Connecticut.